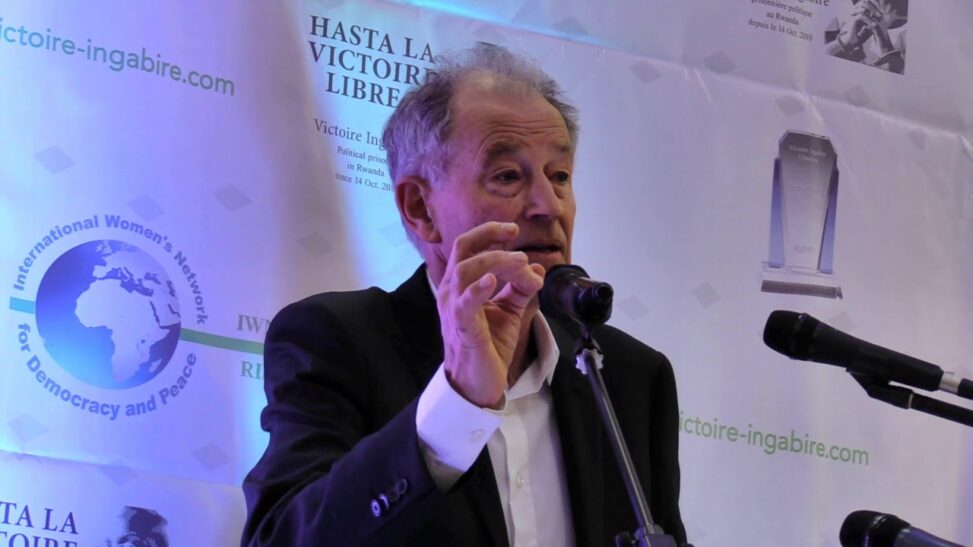 Acceptance speech by Robin Philpot of the Victoire Ingabire Umuhoza Prize for Democracy and Peace [03.09.2019]

I would first like to thank the International Women’s Network for Democracy and Peace honouring me with this Award that bears the name of a great patriot and fighter for freedom, peace and democracy, Victoire Ingabire Umuhoza. But I would also like to congratulate the Network for its extraordinary work. Like Victoire, you and your work inspire us to keep the faith in this struggle. You are contagious and I thank very much for being so.

In less than a month we will be commemorating the 25th anniversary of what was the worst terrorist attack of the 1990s, and what has become the biggest political and media scandal of the last quarter of a century. It is a scandal that gets worse every day that goes by.

You know what I’m talking about: the shooting down on April 6, 1994 of the plane carrying two African heads of State and their entourage. If that plane had not been shot down, we would not be here; Victoire Ingabire Umuhoza would never have been jailed; and very likely Rwanda could have hoped to live in peace over the past 25 years, Rwanda and its neighbours, and particularly the Congo and Burundi.

The crime committed was threefold. 1) the shooting down of the plane; 2) the cover-up and the lies about that crime; and 3) the unspeakably devastating consequences.

When they killed Presidents Juvénal Habyarimana and Cyprien Ntaryamira on April 6, 1994, the assassins killed all hopes of peace and a democratic resolution of the conflict that had paralysed the country since it was invaded on October 1, 1990. Peace that had been negotiated and signed supposedly with the guidance and goodwill for big powers. Peace that could have prevented so many deaths, so much suffering, peace that could have enabled a sharing of power in Rwanda.

Immediately after the presidential plane was shot down, the New York Times, the so-called “journal of record,” established the line. Allow me to quote it: “the credible suspicion is that they were killed by Hutu hard-liners in Rwanda who oppose reconciliation with the Tutsi people.”

Believe it or not, 25 years on, we continue to wade through the same muddy lies about the shooting down of the plane on April 6. Yet all the necessary evidence is there to prove that it was the Rwandan Patriotic Front led by Paul Kagame that shot down the presidential plane. Suffice it to mention the evidence gathered by “National Team” under Michael Hourigan for the International Tribunal for Rwanda; the Bruguière investigation; documents revealed by Judy Rever; Carla Del Ponte’s declarations and removal; even the ICTR abandoned that theory shortly after it received its mandate—it simply had no evidence to bring to bear.

The evidence in fact leaves no doubt that the current president of Rwanda, Paul Kagame, and his army shot the plane down. Their goal and that of their sponsors was, whatever the cost, to put an end to the Arusha Peace Accord, to eliminate any power-sharing plan, and to establish a military powerhouse capable of dominating the entire region. Not for the well-being of the Rwandans, Burundians or Congolese, but of the well-being – or should I say wealth – of their sponsors and their agents in Rwanda. And who are those sponsors? The best indication came directly from the former Secretary General of the UN, Boutros Boutros-Ghali who told me in an interview: “The Rwandan genocide is 100 percent American responsibility,” adding that it was with the help of the United Kingdom.

The third crime is the consequences, but the time does not allow me even to summarize them properly. In short, the consequences include all the deaths in Rwanda; the exodus of millions of Rwandans, mainly towards the Democratic Republic of Congo; the killings by the current Rwandan regime in the Congo, including selective extraterritorial executions elsewhere; the regime’s unending and inhuman hunt and harassment of Rwandans who dare to doubt or challenge the regime’s version of the Rwandan tragedy. The regime in Kigali does this domestically in Rwanda but also throughout the world, and particularly in Belgium, France, Sweden, Canada and the United States (to mention only these countries), and they do it with the help of the legal systems in each of these countries. Their pretext is always the same: fighting impunity.

IMPUNITY: That is a word that has been in all the media and on everybody’s lips since the shooting down of the plane. Peace and reconciliation is impossible, they say, unless those responsible for the tragedy are punished.

To my knowledge never has a word been turned upside and emptied of its meaning like this one.

How have the political authorities in Rwanda their big power sponsors reacted to this triple crime? In short, total impunity has been granted to the real criminals and the wrong people have been criminalized.

Now speaking about ‘impunity.’  On the Twitter account of the International Criminal Court, the ICC, for Feb. 18, 2019, this is what you can read: “Productive meeting between ICC Prosecutor Fatou Bensouda and His Excellency Paul Kagame, President of Rwanda in the margins of Munich Security Conference.” Under the text is an all-smiles photo of the dictator Kagame shaking hands with Fatou Bensouda, the very person appointed to put an end to impunity.

But the world is changing rapidly; there are grounds for hope. Victoire Ingabire Umuhoza was freed. Diane Rwigara was freed. Elsewhere in Africa and in other parts of the world, the signs are positive. The times that allowed criminals like Kagame and his masters in Washington to call the shots in Africa and elsewhere are coming to an end.

Armed with this truth, and with the courage, confidence and determination of people like Victoire Ingabire Umuhoza, we will be capable of victory. And that victory will mean freedom, peace, and democracy for Rwanda and its neighbours.