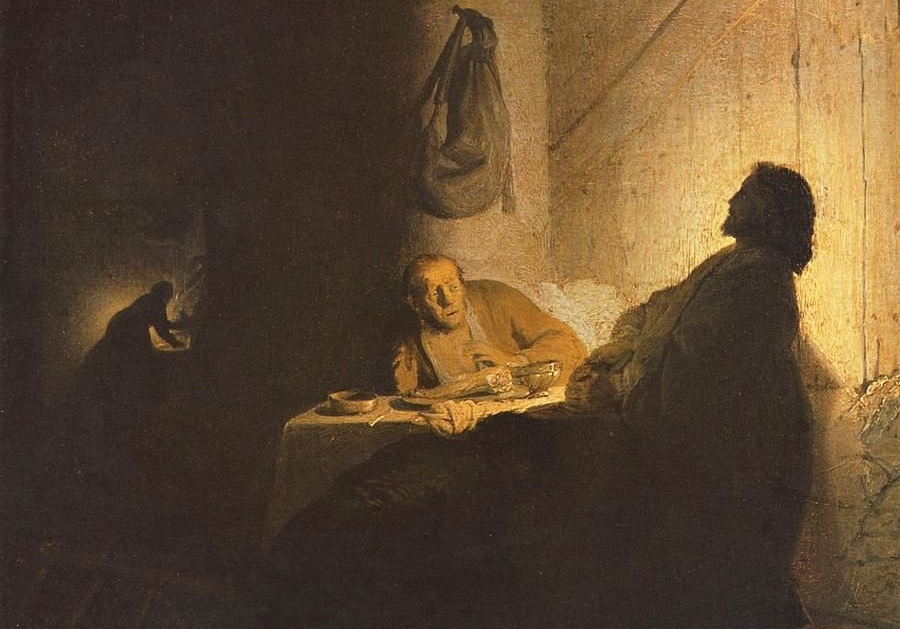 Today, the world finds itself moving through a turbulent transformation between two systems. Collapsing at a faster rate every day are the foundations of a failed imperial world order defined by zero-sum thinking, consumerism and materialism which has defined our existence for decades. The question is now: will the new world system take the form of a new era of global empire, unmitigated war between faiths and a prolonged dark age OR might it take the form of the beautiful multi-polar world order defined by win-win cooperation between all of the nations, faiths and cultures of the world?

Throughout his life, Rembrandt van Rijn (1606-1669) continuously returned to the axiom-breaking theme of the famous biblical story of the ‘Supper at Emmaus’ in order to convey the powerful transformative “moment” of discovery in between the two states of mind of 1) the belief in the death of Christ and the end to his life’s mission and 2) the state of renewed faith in the immortal hope represented by the image of the resurrection. While this lesson is taken from the Christian matrix, it’s universal characteristic provides a lesson for people of all cultures who seek to bring a better world into being

Before jumping to an analysis of some beautiful paintings, it would be necessary to summarize ever so briefly the story of the Dinner at Emmaus.

Featured in the New Testament Gospels of Luke and Mark, Jesus is invited to eat with two of his disciples (Luke and Cleopas) in the town of Emmaus. This wouldn’t be anything exceptional, except for the fact that Jesus had been violently crucified on the cross and entombed days earlier. Neither Luke nor Cleopas recognize their mentor who has been resurrected after being entombed for three days and it is only upon breaking bread with this stranger that they make their discovery just as Christ vanishes miraculously into light.

Whether you are a Christian, Muslim, Jew, Confucian, Hindu, Buddhist or other, the lesson conveyed by this biblical story and especially Rembrandt’s artistic treatment has a universal value for the simple reason that Christ’s life and mission represented a moral power of change which had the unique capacity to undo the foundations of the Roman Empire. This movement accomplished this miraculous feat not through military force, money or any other Hobbesian notion of power, but merely by tuning the hearts and minds of a suppressed people to the power of forgiveness, loving all including one’s enemies, and adhering to one’s conscience before all “political norms of acceptable behaviour” demanded by the Roman oligarchy.

One can imagine how disheartened Christ’s followers were to see that light of hope snuffed out under the suffocating weight of the world’s largest and most evil of empires whose unchallenged power had extended to Asia, Africa and all Europe. One can easily imagine what an existential crisis overwhelmed the hearts of these early followers of Jesus’ Gospel. Were they just naive fools to believe in a better world and a loving Creator when such evil could dominate the world? How powerful and electrifying was the idea that the sacrificed leader of this movement actually succeeded in defeating the one thing which even the most powerful of emperors and kings could not escape? If this were possible, then perhaps the material power of the Empire could be defeated after all and perhaps the ideals of Christ’s life and mission were worth having faith in too.

Over the coming centuries, the Roman oligarchy slowly learned that regardless of how many Christians it burned alive, or threw into the mouths of wild animals for the entertainment of the mob, the movement only grew in numbers. This continued to the point that the Empire was forced to attempt to co-opt the movement by Romanizing it and infusing imperial, pagan practices into its governing structures slowly suffocating the spirit of Christ’s message in favour of the formal structures of the “word” of the book as interpreted by an approved “priesthood” beholden to an oligarchical class.

Amidst this tendency to corruption and decay, Christ’s spirit was periodically re-awakened from time to time in the form of honest souls who broke from formalization to “walk the walk” and live according to their consciences. These courageous souls who “broke from the mould” include such names as St. Augustine of Hippo, Alcuin, Charlemagne, Dante Alighieri, Nicholas of Cusa, Erasmus, Thomas More, and even Rembrandt van Rijn (to name a few). Were it not for their efforts to renew the spirit of Christianity by enflaming the kindling for new Renaissances, Europe would likely still be living under the conditions of the medieval dark age, or worse.

One can also argue that were it not for this transformative and miraculous story of reincarnation, then Christianity would have merely been just another one of many Jewish sects that tried nobly to bring substance to the darkness of a war-ridden world… but ultimately failed.

It is no coincidence that Rembrandt’s famous 1648 rendition of the theme of the ‘Dinner at Emmaus’ was painted during the year that the great Peace of Westphalia was finalised in Europe. This Treaty not only ended the 30 Years War that destroyed generations of Europeans in an endless revengist bloodbath of Protestantism vs Catholicism, but also created a new basis of international law by establishing the system of modern nation states premised around the principles of forgiveness, and the agapic principle of the “Benefit of the Other”. In the modern age, a correlate to this principle is found beautifully in the policy of “win-win cooperation” expressed in China’s New Silk Road which itself emanates from Confucian principles of “Tianxia”. 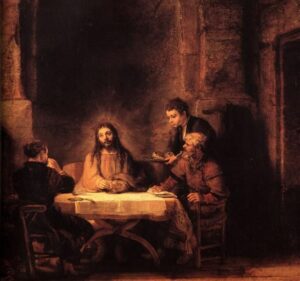 1648 rendition of Rembrandt’s ‘Supper at Emmaus

Rembrandt’s 1628 rendition of ‘Supper at Emmaus’ is featured below with an incredible use of chiaroscuro to convey the divinity of Christ and also the motion from the darkness of ignorance to the light of knowledge. Rembrandt’s choice to place the central focus on the un-named disciple rather than on Christ whom he places in a foreground silhouette is not an accident and neither is the choice to place the maid working in the kitchen covered in shadow and oblivious to the miracle behind her. This central focus on the discovery process occurring in the mind of the disciple creates an opportunity for a cathartic experience with the viewer who is invited to share in the co-discovery occurring before their eyes.

The ethereal divine light emanating from Christ’s figure just before he disappears casts a divine glow upon his surprised associate which is very different from the candle casting artificial light upon the maid in the kitchen. This metaphorical use of light is another device used by all great Platonic humanists to convey the image of different grades of knowledge as outlined in the famous Allegory of the Cave in Plato’s Republic. 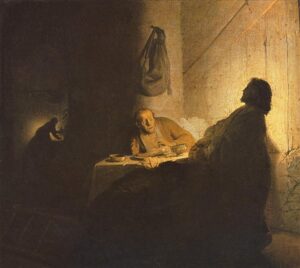 Rembrandt’s 1628 rendition of “Supper at Emmaus”

Another rendition of Rembrandt’s ‘Supper at Emmaus’ was painted in 1648 featuring the artist’s struggle to convey the transformative change. In the version below, Rembrandt placed the light source not in Christ but rather hidden from view covered by one of his disciples. 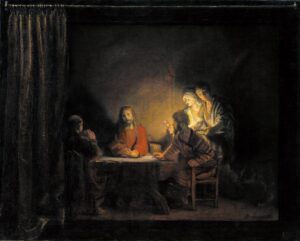 Looking through his surviving thumbnail sketches, we see that Rembrandt considered rendering the scene in a very different manner wherein Christ would be depicted a split second later as pure light. It is worth taking the opportunity to think to yourself: Why did the painter decide not to take this route? Why was the path he chose deemed wiser to the master? What idea is missing from the sketch? 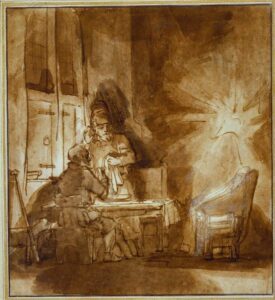 A contemporary painter and kindred spirit to Rembrandt was the Spanish painter Diego Velasquez (1599-1660) who also took on the challenge of capturing the important “in between” moment conveyed in the biblical story. Many contemporary art critics who lack the sensitivity to art’s higher power to convey transformative discoveries often miss the principled intention of both Rembrandt and Velasquez’s moral choice to convey this subject matter (and all their works) as they do. Below we can see Velasquez’s 1623 rendition of the “eureka moment” forever unfolding before the eyes of all future generations.

The hand of one disciple strikes back towards the viewer which also has the brilliant technical effect of immersing the audience into the living experience of discovery and further abolishing the false “wall” separating the “subjective” viewer from the “objective” art being viewed. 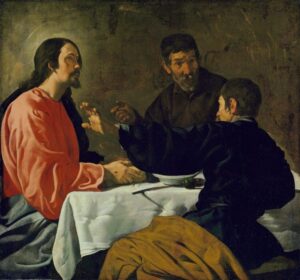 A few years before this painting, Velasquez tackled the same theme from the unique standpoint of the servant girl fixing a meal in the kitchen and placing the divine transformative scene in the background… not to downplay the importance of the event but to give the viewer a chance to breath, and ponder the co-existence of the divine and the ordinary world in which we all exist which are too often fragmented and divided by an unbridgeable gulf between “abstract” spiritual concepts and “real” material facts.

We hope that during the days following the Easter Sunday you, dear reader, take the time to seek the power of creative love and faith in a better world within yourself while sharing the fruits of that search with others. Perhaps, in so doing the lives of such great souls as Velasquez, Rembrandt, Confucius, Socrates, and Christ may come alive once more.